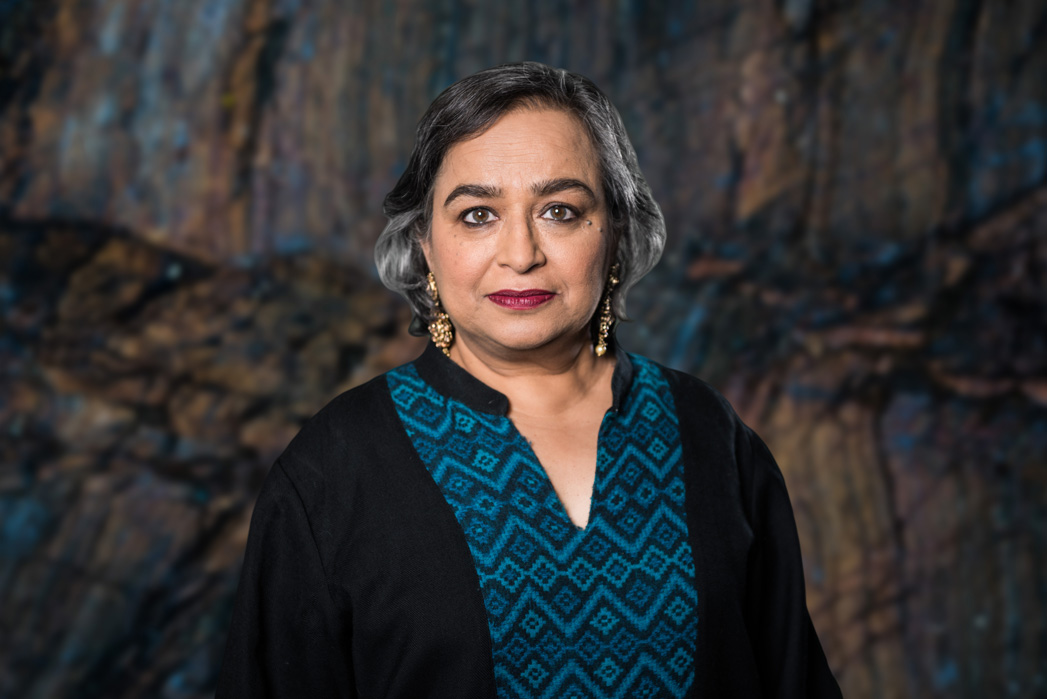 Actor, writer, manager, Jasmine has worked extensively in community and professional theatre in India and Saudi Arabia before coming to Canada. She is the Co-Founder and Artistic Co-Director of SAWITRI Theatre Group since 2003.

Jasmine’s most recent stage acting credits include SAWITRI Theatre Group’s productions of Mahesh Dattani’s English play Where There’s A Will (2018) , Gujarati play, Madhu Rye’s Koi Pan Ek Phoolnu Naam Bolo To? (2015) – Tell me the Name of any flower and Mahesh Dattani’s Seven Steps Around the Fire (2013) and Where There’s A Will (2012). Her most recent film credits include, her role in award-winning films, Parvati in Depth of Pyar (2019), Grandma in Street Soldiers (2016) and Kamla in Dowry, (2015). Other credits as listed on Imdb.

asmine is indebted to the late Mahendra Joshi, her mentor in theatre, whom she met in 1975 and with whose encouragement and support she briefly pursued professional theatre in India, along with actors Paresh Rawal, Swaroop Sampat, Sameer Khakhar, who went on to be celebrated actors on stage and in Bollywood, and directors as Dinkar Jani and the late Shafi Inamdar. In Mumbai, Jasmine has also written, directed and acted in plays in French and German.

An award-winning alumnus of the post-graduate journalism program of Bhavan’s Rajendra Prasad Institute of Communications, Mumbai, and the recipient of the 2016 Martys for Established Literary Arts Award, she started writing plays after she moved to Saudi Arabia and continues to hone her writing skills in Canada, having written and co-written plays for SAWITRI Theatre Group including, Savita Weds Satish with Adam Langton, which was produced and presented in 2018 and remounted in 2019 at the Small Arms Inspection Building, Mississauga. Her narrative script for Sampradaya Dance Creations’ dance production, Pralaya, was greatly appreciated over the world, as the production toured 3 cities in Indonesia and 7 cities in India in 2019 and 8 cities in Canada in 2016. Her original script Gramma, based on Dr. Jane Fraser’s family history, was produced to celebrate Canada’s sesquicentennial year in July 2017. Her English translation of the award-winning Marathi play, Case #99, by Yogesh Soman, was produced and presented in 2015 and remounted in 2016. The Kallus Next Door, was published in Word Fest, Celebrating Ideas. It was also read at the 2014 INSPIRE! Toronto International Book Fair. Saree Kahaniyan – Saree Stories published in Word Fest, Celebrating Our Journeys, was performed on many occasions. One World Our World, a dance theatre piece for young audiences, commissioned in 2009 by Sampradaya Dance Academy, was remounted in 2015.

Jasmine is a member of the Playwrights Guild of Canada and the Mississauga Writers’ Group. Her recent works for SAWITRI Theatre are Savita weds Satish (2018) in collaboration with Adam Langton, Gramma (2017) and the English translation of the full length award-winning Marathi play, Case #99 (2015) by Yogesh Soman, India’s celebrated and prolific Marathi playwright. The English translation received its world premiere in October 2015 at Sampradaya Theatre, Mississauga and was remounted at Buddies in Bad Times Theatre, Toronto from May 5th to 14th, 2016.

Her other avatar is as the General Manager of the award-winning dance company, SAMPRADAYA Dance Creations. Prior to joining SAMPRADAYA in 2004, Jasmine worked at ARI Financial Services where she was responsible for corporate accounts and customer service. She has taught at the Indian Embassy School, Dammam, Saudi Arabia, worked at the French Embassy in Bahrain and the Max Mueller Bhavan (Goethe Institute) in Mumbai. Jasmine holds a degree in Accounting from the University of Bombay and diplomas in Journalism, French and German. She has been in theatre and film for over 25 years and believes that it all begins with a good story.

Devoted to the enrichment of the South Asian performing arts, Jasmine collaborates with South Asian organizations as Panorama India, Sur Sangam Foundation, Marathi Bhashik Mandal, Hindi Writers’ Guild, RangManch Canada, etc. She was the Coordinator of Desi-Lit’s Mississauga Chapter and a member of the Meadowvale Theatre Community Panel and past Board Member of the Small Arms Society, Mississauga, now renamed CreativeHub 1352. She has also held volunteer positions on school councils, with Scouts Canada, and Peel Health’s Community Food Advisor Program. 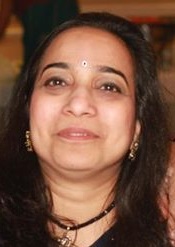 Artistic Co-Director, Actor, Writer and Administrator – B.A. in Sociology, Diploma in Creative Writing, British Council (India) – Shruti has worked extensively in professional theatre in India before coming to Canada. She works with Jasmine in artistic programming, communications and general administration.

Having successfully led the team of directors for 9 of  playwright Tanuj Khosla’s short plays and Chinu Modi’s one act plays in 2019, Shruti Shah is in rehearsal mode for directing playwright Uday Krishna’s one-act play for Hindi Shorts 2020. She had directed 12 micro-plays in 2018, written by Tanuj Khosla. Her recent stage acting credits include her role in Chinu Modi’s Gujarati one-act Hajara Hajoor, where she plays the Goddess Incarnate. She also played the lead in Madhu Rye’s Koi Pan Ek Phoolnu Naam Bolo To? – Tell me the Name of any flower and Saree Kahaniyan – Saree Stories, and her writing credits include Ab Kya Karey? (What Now?) and Meri Saas Meri Jaan that she co-wrote with Jasmine Sawant. Her recent film acting credits include Neha in Street Soldiers (2016) and Sakshi in Dowry, (screened at the 2015 ReelWorld Film Festival).

Shruti was born and raised in Mumbai, (formerly Bombay) India, the city of dreams. She has loved Bollywood films since she was a little girl, but never pursued a career in films, TV or Radio, because growing up in the 70’s, it was still not considered right for girls to be part of the entertainment/performing industry. Shruti however has remained an avid viewer of these films, and a reader of all things filmi or Bollywood.

An alumnus of Arya Vidya Mandir, Mumbai, Shruti participated in theatre in school and studied Shakespeare, her favorite being the Merchant of Venice. It was very karmic when she was approached to play a part in a professional production of the play while at St. Xavier’s College, Mumbai. The play, directed by Salim Ghouse, went on to stage several performances at prestigious venues as the National Centre for Performing Arts (NCPA Mumbai), Prithvi Theatre in Mumbai as well as other cities in India. And then there was no looking back – Hamlet, Chekhov, etc. Shruti continued to participate in theatre at all levels, including sound, light, backstage support, wardrobe and makeup. When she worked on the Hindi productions Hera Pheri and Hum Dono she had the opportunity to work with established names in the Bollywood industry as Shubha Khote, Rakesh Bedi, Smita Jayekar, Tom Alter, Avtaar Gill, Anant Mahadeven, Bhavana Balsaver and Shekhar Suman. Her work in professional theatre also involved touring with the productions across the length and breadth of India as well as the Middle East.